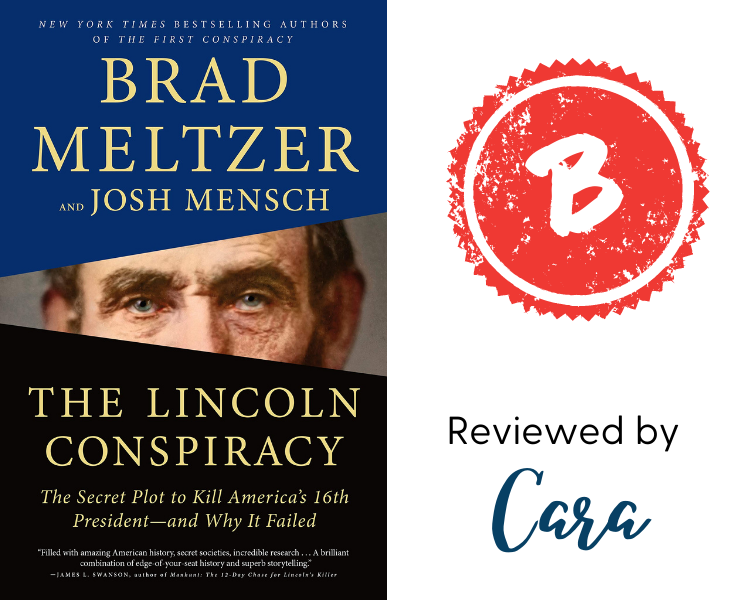 I enjoy that Meltzer has entered the adult non-fiction category—The First Conspiracy and now The Lincoln Conspiracy—exploring lesser known conspiracies that happened in American history with his signature writing style that he’s known for in a mystery meets non-fiction mash-up.

Most people know the story of Abraham Lincoln’s assassination in 1865, but few know of the original conspiracy to kill Lincoln four years prior. The Lincoln Conspiracy chronicles the plot to kill Lincoln before he even became president in 1861 on his way to the White House for his inauguration.

The book starts in Illinois, of course, with a little background on Abraham Lincoln and the highly contested election of 1860. I knew a little about this history but it was more in-depth about why Lincoln actually became president, which I found intriguing.

The book then follows the months leading up to the inauguration train journey to Washington, DC and how all along in the background the conspiratorial plot was forming in Maryland. It doesn’t yet connect the plots point and leaves you wanting to read more as the tension ramps up.

As the train journey approaches and the conspirators plot is finalized you wonder if anyone will come to save the day. Here enters Allen Pinkerton, and his undercover agents, who have infiltrated the conspirators’ network in Baltimore, Maryland. Of course we know Lincoln became president so he wasn’t assassinated before he made it to Washington, DC but you will have to read the book to find out what happens next.

Overall, The Lincoln Conspiracy is well-researched and engaging with all the twists and turns along the way. It read like a great mystery novel and keeps you reading to find out what happens next.