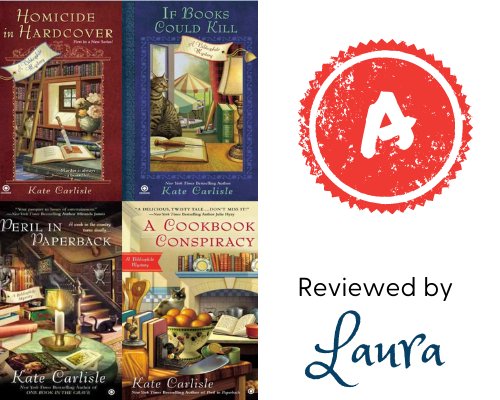 The mystery genre loves a good series, with many fan favorites going well past twenty books in a series. As a reader, this is pretty awesome—find an author and a character you like, and settle in for a regular dose of reading joy. This applies to one of my favorite cozy mystery writers, Kate Carlisle who writes several different series, including the Bibliophile Mystery series. Every June, a new book comes out, and I get to catch up with the same characters as if they are long-time friends.

The Bibliophile series centers around Brooklyn Wainwright, a young professional bookbinder who lives in San Francisco. Brooklyn was raised by her New Age hippie parents in a commune that is now a thriving Sonoma wine town. These two towns provide an excellent background for much of Brooklyn’s sleuthing. Along the way, many of the same characters continue to pop up including former British spy Derek Stone, local man of mystery Gabriel, Brooklyn’s best friend Robin, and numerous quirky Wainwright family members. The mysteries themselves are light and quick to read with humor and a little bit of romance. Each book features an old book to be restored and Carlisle does an excellent (if not sometimes long-winded) job of explaining the restoration process. Books in the series can stand alone, but the series is definitely better when read in order to better see the character progression. The first book in the Bibliophile Mysteries is Homicide in Hardcover.

This year’s new release is The Grim Reader—number fourteen in the series. It takes place in Brooklyn’s hometown as the community gets ready to launch its first ever book festival. Everything is going well until Brooklyn’s mom is threatened and her fellow festival committee member turns up dead. The whole cast of characters is on hand for this book and we get a whole host of updates on what is happening in their lives. Unfortunately, The Grim Reader is not the strongest mystery in the series and is more predictable than others. That said, the book is still enjoyable, if only to catch up with the characters and their shenanigans. It is also nice to see how the characters have grown and evolved over the course of the series, especially Brooklyn. In the first book, Brooklyn starts out as a pretty clueless sleuth, likely to get herself killed, and grows into a strong female character, capable of holding her own.