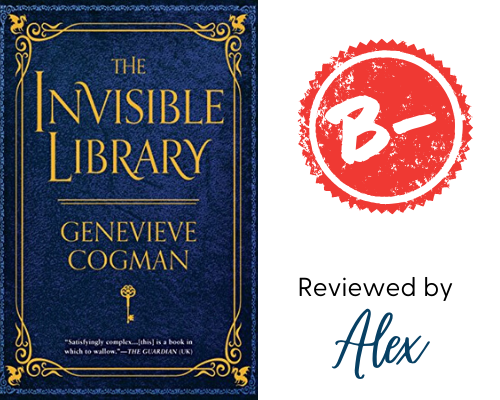 Which basically makes Irene: Catwoman with a deep & abiding love of literature.

Along with her smoldering new assistant Kai, Irene's been sent on a mission to retrieve a book from an alternative London. The problem? The Library isn't the only one who wants to get their hands on this tome. Which wouldn't be a huge problem for a veteran Librarian like Irene except that the world where she's been sent is chaos-infested. Meaning, supernatural creatures (vampires, werewolves, and faeries! Oh my!), a secret society wielding a steam-powered centipede, and a murderous ex-Librarian, all stand between Irene and mission completion.

Magical library? Steampunk London?  Eye candy assistant who has the hots for you?

Irene's got it made and I am not jealous at all. Not. At. All.

So why the B- rating?

While I really enjoyed The Invisible Library and immediately picked up The Masked City (Book #2)—I kind of lost that spark that keeps me coming back for more. Don’t get me wrong. I enjoyed both books. They were light, easy fantasy reads and I adore the world that Cogman has created. There just wasn’t that obsessive compulsion to keep reading that I get with my favorite series—like Parasol Protectorate. So for now, I’ve relegated the series to my TBR pile with plans to revisit it soon.