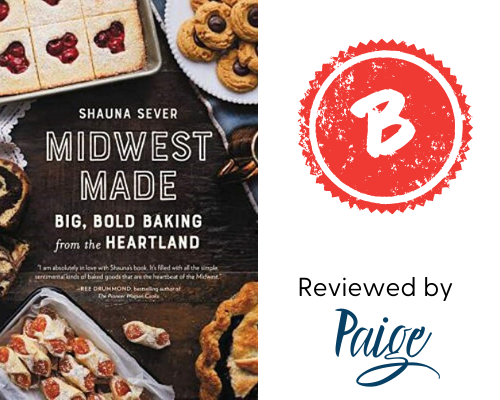 My love of The Great British Baking Show knows absolutely no bounds.  The pastels, the politeness, the pastries…I eat it all up.  And while I’m a fairly proficient baker, many of the challenges are still quite foreign to me.  I’ve never had mince pies.  I don’t know what a Victoria Sandwich is supposed to look like.  And their pudding is definitely not like the pudding I’m used to.  A great part of the fun, though, is being exposed to these new and delicious bakes.  And, of course, trying them out myself…to varying degrees of success.  That being said, I still get nostalgic for the baking I grew up on.  It wasn’t fussy or fancy, but it always tasted delicious, and it always brought everyone to the table ON TIME!  Shauna Sever explores this nostalgia with her latest cookbook, Midwest Made, which celebrates the Midwest’s slice of the baking world.

Sever begins the book with two small sections describing her pantry and her favorite tools.  I found the pantry section to be particularly helpful, as she provides suggestions within a “Midwest” context – something that is echoed throughout all recipes in the book.  All ingredients can easily be found at your local grocery store or online, and all for a reasonable price (nothing too fancy!).  Sever then splits the rest of the book into eleven chapters, each one devoted to a type of bake:  sweet doughs, pastries, pie, cookie jar contenders, counter cakes, bars, special occasion cakes, summer sweets, savories, winter holidays, and elements (e.g. jams, frostings, etc.).

For the Sweet Doughs chapter, I tackled the Coffee Caramel Monkey Bread.  This bake was less about nostalgia and more about my desire to have coffee, caramel, and bread all in one fabulous bite.  And the taste did not disappoint, as the coffee flavor elevated this beyond a standard monkey bread, into full-on adult indulgence.  As expected, the caramel itself was the trickiest part to get just right.  Unfortunately, the recipe does not provide much direction – the addition of a “target” temperature would have helped immensely.

I also tried the White Chocolate Cream Cheese Danish recipe using the Shortcut Danish Pastry, both from the Pastries chapter.  Even though the white chocolate flavor disappeared a bit after baking, the overall effect was still pretty good.  I opted against topping with icing, as I felt they were sweet enough as is.  The “rough puff” method used for the pastry resulted in good, flaky layers, and it was slightly less time consuming than normal puff pastry.  Not an everyday bake, but certainly a fun treat.

For the Bars chapter, I chose an Iowa classic:  Scotch-a-Roos.  They pop up at nearly every potluck or get-together, they require just a few ingredients, and they’re pretty hard to mess up.  Thus, do I really need a new recipe when my old one tastes just fine?  Turns out, I totally do.  Her version uses brown sugar instead of white, adds vanilla, and heats everything together in one pan (my old recipe added the peanut butter off heat).  The result tasted virtually the same, but the bars didn’t seem to get as firm, which made cutting them way easier.  I’m putting this down to SCIENCE! and molecular changes, but who really cares as long as they taste good.

Fluff is another frequent flyer at potlucks, so I was excited to try the Angel Fluff from the Summer Sweets chapter, which was touted as tasting like an Angel Food Cake in fluff form.  While the recipe delivered in the taste department, I’m not sure the texture was entirely right for “fluff”.  This definitely has potential, but I think it needs a little tweaking to become truly great.

My favorite recipe from my test run came from the Savories chapter:  Big, Soft Pretzels.  Having never made pretzels before, the technique was entirely new to me.  Yet, I was able to successfully make them on my first attempt, and they tasted just like the pretzels you can buy at ballparks.  If only recipes for dipping sauces or other coatings had been included.

The only recipe I tried and really didn’t care for was the Cheater’s Fudge, part of the Winter Holidays chapter.  It didn’t have enough flavor or interest, weirdly called for two different types of salt (to no noticeable effect), and the butter and condensed milk “split”, resulting in some oily splotches on the surface.  Nice idea, bad recipe.

In general, I do believe the variety of recipes and overall concept of the book make it a worthwhile read.  However, if you like foolproof recipes that work perfectly the first time you make them, then this may not be the book for you.  If you want to explore the roots of Midwestern baking, and you like to tinker with recipes to get them just right, then this should be up your alley.